The Niagara Frontier Transportation Authority will host an open house at the new, state-of-the-art $31.5 million passenger terminal Wednesday, Sept. 2 from 1 to 7 p.m. The whole community is invited to view the new facility first hand, including the customer-oriented passenger processing areas, a two level layout for jet bridge boarding and other advancements.

Military and private vintage aircraft will be on display. A fly-over by the Navy’s Blue Angels is scheduled for 5 p.m. Free parking is available at the terminal, or at The Summit on Williams Rd. Metro Bus will provide free roundtrip shuttles until 7:30 p.m.

The Niagara Frontier Transportation Authority dedicated its state-of-the-art $31.5 million passenger terminal today. It is the major component of an overall $42.5 million NFIA Airport Improvement Project that includes $11 million in apron and landside improvements. At 69,430 square-feet, it is efficient, user-friendly and ready to meet the sophisticated needs of 21st century aviation.

Henry M. Sloma, NFTA chairman said, “Airports are more than transportation facilities. They are gateways. They are a visitor’s first, and last, impression of a region. This new terminal makes such a great impression, it stands as a tribute to the people of this community. This is a landmark in which we can all take pride.”

The creative design of the new terminal reflects the grandeur of the Niagara region, and the wonder in its care. Functionally, the design adheres to guidelines established by the Federal Aviation Administration and International Air Transport Association. Further, the terminal incorporates ‘green design’ for the roof, windows and climate control systems, making it highly energy efficient and environmental friendly. Aesthetically, the roll of the Niagara rapids can be seen throughout the design. Flow – in terms of water, air and passengers – is the central theme.

Lawrence M. Meckler, NFTA executive director, said, “This airport is the culmination of hard work, leadership and foresight of individuals across the region. This terminal is designed for today’s traveling public and anticipates tomorrow’s. As the area continues to grow and prosper, so to will this airport.”

The NFIA is now capable of simultaneously processing international and domestic flights, and fully accommodating 747 and 757 aircraft. The innovative, and scalable, split-level holdrooms provide all passengers with an outstanding level of customer service regardless of aircraft size. The new terminal was designed by Stantec Inc., whose portfolio includes airports in Vancouver, Edmonton, Chicago O’Hare and others. Construction of the terminal was the task of Walter S. Johnson Building Company, a local firm started in 1923. They count renovation of the Crown Plaza Hotel and the Seneca-Niagara Casino and Hotel as two of their most recent achievements.

“Creating this reality was a challenge taken up by the trades people of Western New York,” Sloma said. “The men and women who built this airport have outdone themselves. I hope each enjoys a moment in the future when they point to this terminal and tells a child or grandchild, I helped make that.”

The terminal’s dedication ceremony included the placement of a time capsule, an open house for the general public, a display of military and private vintage aircraft, and a fly-over by the Navy’s Blue Angels. The Niagara Military Affairs Council, who works on behalf of our local military troops from all service branches, lent support to the event. The Ira G. Ross Aerospace Museum arranged for aviation artifacts showcasing the foundation of aerospace history in Niagara Falls. In addition, essay contest winner Brittany Mezhir, a seventh-grader at Lew-Port Middle School, was honored for her Look into the Future of Aviation. Matthew Buerger, senior at Lewiston-Porter High School, was awarded a Space Camp scholarship by the NIMAC. Located within 500 miles of 55 percent of the U.S. population and 62 percent of Canada’s population – and just 15 minutes from the Falls itself – the Niagara Falls International Airport is indeed ready for take off.

The NFTA and Niagara Gazette are sponsoring an essay contest to celebrate the new Niagara Falls International Airport terminal, opening September 2. The last 50 years in aviation history has brought us everyday jet travel, men on the moon and robots and mars. What will the next 50 years bring? Tell us in a 100-150 word essay.

Chosen essays will be placed into a time capsule during the dedication of the new Niagara Falls terminal and opened in the summer of 2059. Winners will each receive a $100 United States savings bond and have their essay published in the Niagara Gazette’s commemorative publication. 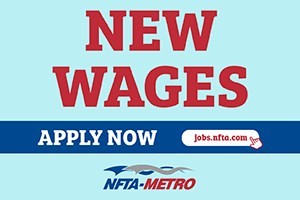